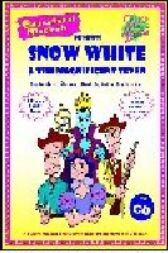 Snow White is beautiful and intelligent

But behind her father's back, Snow White's jealous stepmother arranges to have her killed

However, the Woodcutter who has been forced into killing her, can't do the dreadful deed and instead leaves her deep in the spooky forest

Snow White is now lost and all alone ...

... until she stumbles on a run down log cabin and some very unusual cowboys

Meanwhile, incensed at Snow White's survival, her stepmother hatches a plan to get rid of her once and for all!

This panto has been specifically created to be performable by children