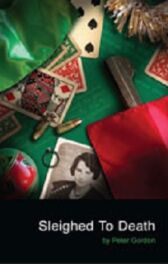 And it's Christmas Eve in the manor house of the bumbling aristocrat, Sir Walton Gates and his wife Grace

Emma, Sir Walton's daughter from a previous marriage, arrives from town with her new companion in tow - the dashing James Washington

Added to the mix is Sir Walton's estranged brother Archie, recently returned from years spent in Australia, bringing with him an appetite for mischief and a dodgy accent

And identities are confused

But can Pratt identify the individual with murderous intent before a body is found?

Secondary Cause of Death