Six Who Pass while the Lentils Boil 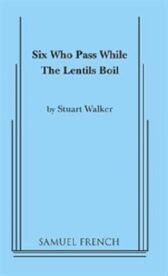 While the Boy watches boiling lentils for his mother, six people pass: the condemned Queen (who he promises to hide), the Mime (who tempts him abandon his duty), the Milkmaid (who tells him about the reward offered for the Queen), the Blindman (who shows him why it is best to keep a promise), the Ballad Singer (who would wander all his life rather than break a promise) and the dreadful Hangman (who is outwitted by the boy)