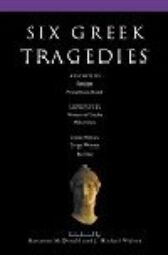 A single-volume edition of the major Greek tragedies

In a period of sixty-six years, three Athenian playwrights produced a series of tragedies which became a touchstone for drama for the next two and a half thousand years

The six plays in this volume include Aeschylus' Persians (472 BC), the earliest surviving Greek tragedy and only surviving 'history' play; his Prometheus Bound, perhaps the most deeply mythological of all tragedies, presenting an archetype of the human condition; Sophocles' Women of Trachis, a deeply poignant piece, portraying Heracles' death through his wife's mistake; his strange Philoctetes, which presents a fascinating moral debate and a young man's realisation of the importance of loyalty to his own ideals; Euripides' Trojan Women, the greatest anti-war play ever written; and his intangible Bacchae, a play full of paradoxes which functions at many different levels