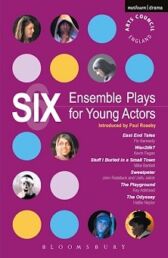 Varying in style and subject matter, the plays offer performers, directors and designers a range of exciting challenges

Where contemporary urban living is confronted in plays ranging from the starkly realistic to the playful, lyrical and surrealistic

From the innocent and imaginative world of a school playground to issues of racism, peer pressure, crime and communication in a mobile phone obsessed culture, this is a wide-ranging anthology that will enrich the repertoire of youth theatre groups and the curriculum in schools

The Plays in this volume are ...

The Odyssey by Hattie Naylor

The Playground by Kay Adshead

Stuff I Buried in a Small Town by Mike Bartlett

The volume is introduced by Paul Roseby, artistic director of the National Youth Theatre