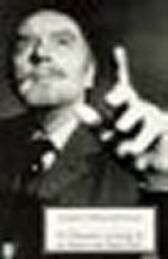 Luigi Pirandello was born of rich, middle-class parents in Girgenti (Agrigento), Sicily, on 28 June 1867. As a young man he studied at the Universities of Palermo, Rome, and Bonn, where he gained his doctorate in 1891. His first published work, Mal giocondo (1889), was a collection of poems. It was followed by other volumes of poems, critical essays, novels, short stories, and over forty plays

In 1894 he married Antoinetta Portulano, the daughter of his father's business associate. Financial disaster and a severe illness brought on by the birth of their third child drove his wife to a hysterical form of insanity. Only in 1918, when her presence in the family constituted a real threat to their daughter's safety did Pirandello agree to have his wife committed to an asylum. The enormous emotional strain he felt at this time is reflected in the intense pessimism found in his work

Pirandello's first real success in the theatre came about in 1921 when Six Characters in Search of an Author was performed. Henry IV followed the next year and confirmed his position as a playwright. In the following years Pirandello travelled abroad extensively. He embarked on a career as a producer and in 1925 founded his Art Theatre in Rome. He was awarded the Nobel Prize for Literature in 1934 and died in Rome on 10 December 1936