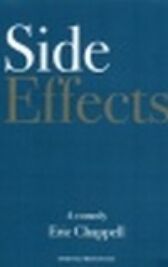 An hilarious comedy for two men and three women set in the visitors' room of a convalescent home ...

Frank Cook, having been taken ill with a rare complaint, has been booked into a private nursing home by his wife June for a week's respite

Whilst there, he encounters the Reverend Paul Latimer who is recovering from a heart transplant and whose odd behaviour is beginning to alarm his wife, Sarah

She's convinced that the vicar's new heart belonged to her recently deceased lover Melvin - a fairground "wall of death" rider!

Could it be that Paul has taken on Melvin's personality traits as well as his heart?

That would certainly explain the swearing, the smoking, the drinking and the clandestine canoodling with Tracey in the rose garden

Then again, perhaps he's just suffering from the side effects of his medication?

Frank - ever the cantankerous sceptic - is delighted by the vicar's fall from grace, while June does her best to rein in his detective work

Frank Cook, 50s. A recent invalid and resentful of his condition. Anti-clerical

June Cook, his wife. A few years younger than Frank. She is long-suffering, frustrated, but with a wry sense of humour

Rev. Paul Latimer, 40s. The recipient of a heart transplant. Superficially confident but at breaking point. Inclined to be priggish and judgmental

Sarah Latimer, his wife, 40s. Relentlessly middle class. A cut glass voice and rather precious but not a fool