Shrapnel - 34 Fragments of a Massacre 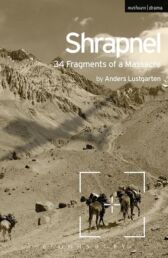 Watching video footage from a drone, Pentagon officials see a huddle of people unarmed smugglers, with mules treading their familiar path across the Turkish-Iraqi border

Piecing together the fragments of the tragedy, Anders Lustgarten's startling new play dares to ask what a massacre is made of

Shrapnel is a story of malicious commands and mournful commemorations

An urgent, powerful insight into the state of modern warfare

★★★★★
"Left me physically shaken, in tears, and feeling sick and I cannot thank its writer, director and cast enough" ~ Stage Review

★★★★
"Makes its point with a controlled ferocity" ~The Guardian

★★★★
"This is a heartbreaking, terrifying story that needs to be told" ~ Remotegoat