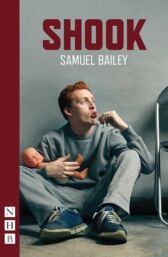 "He'll look different. My little boy. When I get out. Like to the picture I've got in my head. Be like meeting him all over again. Be a whole new start'

Instead of GCSEs, Cain, Riyad and Jonjo got jail sentences

Locked up in a young offender institution, they trade sweets, chat, kill time

Grace's job is to turn these teenagers into parents, ready to take charge of their futures

But can they grow up quickly enough to escape the system?

"One of the most important theatrical debuts of the decade" ~ BritishTheatre.com

'The best debut play I've seen in years... an important play as well as a well-written one' ~ Louise Doughty, Saturday Review

'What a treat this play is ... a state-of-the-nation piece giving voice to a class that often are not allowed to speak' ~ Maria Delgado, Saturday Review

"Every year the Papatango New Writing Prize comes up with a bit of a cracker ... "Samuel Bailey's prize-winning script ... glints with quick, sharp wit ... has real-world resonance in its theme of quiet despair. Occasionally, a gap forms in the topsoil of hyper-masculine repartee of put-downs and piss-takes to reveal the emotional abyss beneath" ~ Michael Billington in The Guardian

"A cracking debut ... Both laugh-out-loud funny and brutally honest, catching you off-guard with touching moments when you least expect it" ~ WhatsOnStage

"The most effective kind of political theatre is the kind that stealthily creeps into your consciousness, like a crush on a person you never before thought could be your type. The source of many a tangential thought, it announces itself with gentle provocations that lead to profound revelations .... Samuel Bailey's exploration of empathy, set in a young offenders' institution, is political theatre at its finest ~ Exeunt magazine