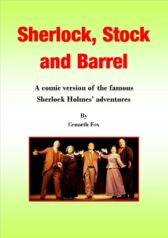 They even resort to telling two tales at once!

And there are songs as well

A fantastic challenge for the performers and a hoot for everyone

"If the Reduced Shakespeare Company were to tackle Sherlock Holmes the result might be something like this, but it would probably lack Cenarth Fox's profound knowledge of the Holmesian Canon ... it works beautifully and the result, necessarily played at a frantic pace, is dramatic, tuneful, ingenious, and above all very funny" ~ Roger Johnson Sherlock Holmes Society of London

" ... a very enjoyable piece and the audience on opening night caught on to the stories and performance style right from the start. It's a bright show which entertains, is a crowd pleaser and would be a great way to finish off a theatre year. To sum up, lots of fun and well worth a look see" ~ John Gunn, Curtain Up

"This entertaining play has you chuckling all night from curtain up to curtain fall. Apart from a wonderful script, Cenarth Fox has included some very catchy tunes" ~ Brian Amos Radio Eastern 98.1