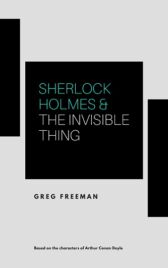 "It is an old maxim of mine that when you have excluded the impossible, whatever remains, however improbable, must be the truth" ~ The Adventures of Sherlock Holmes

And the fearsome 'Invisible Thing'

As they probe into the mysterious lakeside drowning, something startling emerges

" it is a very, very good tribute and an excellent stand aloneplay" ~ LondonTheatre1