Sherlock Holmes and the Curse Of Moriarty 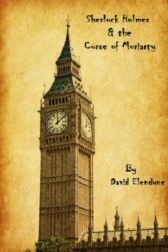 Via flashbacks, we learn the shocking truth behind what caused the disappearance of the world's greatest detective