Sherlock Holmes and the Adventure of the Suicide Club 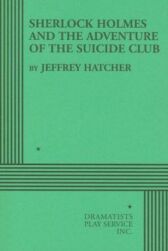 Stage thriller featuring the famed sleuth in a tale full of mystery, romance, twists and chills

In the heart of London, behind the impassive facade of a windowless house, some of Europe's most powerful men gather to play a game ...

The game is murder

And this is The Suicide Club

But the club has a new member - Sherlock Holmes: brilliant, brooding, the greatest detective in the world

So why does Holmes wish to die?

And can his friend Dr Watson save him?

Or doesn't Holmes want to be saved?