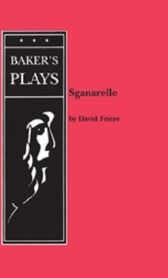 It's just a typical day for poor Sganarelle

His wife Marguerite thinks he's having an affair with sweet young Celie, who fainted in front of his house

But it was only because her father refuses to let her marry stalwart young Lelie, the man she really loves

Meanwhile, Lelie also thinks Sganarelle is having an affair with Celie because he caught him with a portrait meant for her as a sign of his undying devotion

When Sganarelle and Celie catch Lelie and Marguerite together things really get complicated!