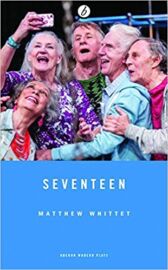 It's about the cusp of adulthood

Set in that time after the end of the very last day of school, just before everyone moves on

But Tom is secretly in love with Jess

And she's about to get drunk for the first time

Well, no-one invited Ronny and no-one's quite sure why he's there

As dawn approaches, through a fog of cheap beer, dreams are shared, insecurities aired

Funny, wise and a little bit sad, Seventeen - performed entirely by a cast of "mature" actors - brilliantly turns our notions of adulthood and adolescence on their head

★★★★ "The play wins one over by its sharp understanding of what it is like to be a confused, bewildered teenager ... Under the routine booze and banter, Whittet's play gradually grips through its revelation not just of the insecurity but of the buried emotions of these partying teenagers ... As friendships are fractured and new alliances formed, Whittet captures the sense that this is a pivotal moment in all these young lives... The initial sense of deja vu leads to a play that taps into our collective memories of the pains of youth" ~ Michael Billington, Guardian