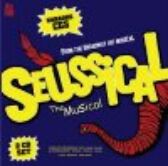 Debuting on Broadway in 2001, Seussical is quickly becoming one of the most popular musicals performed by schools across the US

With familiar Dr Seuss characters, such as Horton the Elephant and The Cat in the Hat, Seussical has themes of friendship, recognizing your potential, and believing in yourself that appeal to all ages

Oh, The Thinks You Can Think

Horton Hears a Who

A Day for the Cat in the Hat

How to Raise a Child

Alone in the Universe

How Lucky You Are