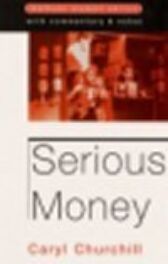 Serious Money is perhaps Caryl Churchill's most notorious play. A satirical study of the effects of the Big Bang, it premiered at the Royal Court in 1987 and transferred to the West End

Since then, it has prompted city financiers the world over to applaud and decry its presentation of their lives. British Telecom refused to provide telephones for the Wyndham's production, writing to say that "This is a production with which no public company would wish to be associated"

"A breathless, exhilarating crash course in the low morality of high finance" ~ Independent

This Student Edition contains a chronology of the playwright's life and work; an introduction giving the background to the play, a discussion of the various interpretations and notes on individual words and phrases in the text