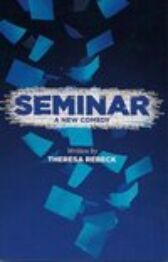 "Four youngish writers are gathered in an Upper West Side apartment waiting for Leonard, a fiction guru for whose counsel they have each paid $5,000

They are a fractious lot even before Leonard arrives, swapping barbs about one another's pretensions

The play begins with Douglas, the nephew of a famous playwright, rambling on about "the exteriority and the interiority" of a writers' colony where he has spent time, and unctuously dropping terms like "postmodernism" and "magic realism"

But that's nothing compared to the verbal flatulence that fills the air once Leonard arrives, trailing weary contempt and sexual charisma

A once celebrated novelist, Leonard is now best known as an exacting editor, teacher and grandstanding chronicler of life in danger zones in third-world countries (Moldova, Rwanda, Somalia), where he stares down "the most terrifying nihilism this planet has to offer"

But Leonard reserves his most annihilating eloquence for shredding the egos of his students ... " ~ The New York Times