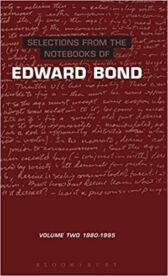 This second volume of Edward Bond's notebooks covers the period from Restoration, his historic drama with songs, to Eleven Vests, his play for young people written for Big Brum Theatre-in-Education

"There is a cliché - which is also false - that all creative writing is autobiographical. If I were to be asked when you write do you write about your life I would answer when I write I am living my life" - Edward Bond

Including first drafts of plays, ideas and thoughts on characters, themes, actions and dramatic technique, this Selection of Notes provides a glimpse into the working mind of one of the world's most provocative playwrights

Alongside the commentaries on the plays, Bond's Notes also contain stories and poems and his philosophy on theatre and art and his views on the role of the writer in society are included

Emphasis is given to Bond's critical response to political and moral issues such as Thatcherism, the monarchy, nuclear war, Britain's social classes and our definitions of good and evil