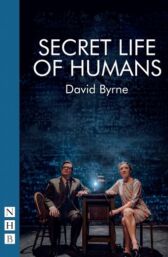 Why are we afraid of the dark?

Why do we get lonely?

Why do we wage wars?

In 1949, scientist and mathematician Dr Jacob Bronowski installs a hidden, locked room in his house.

Fifty years later, his grandson discovers the secrets contained in the room

Unearthing echoes from across six million years of human history

Secret Life of Humans was first seen during a sell-out, award-winning run at the Edinburgh Festival Fringe in 2015

It had its London premiere at New Diorama in April 2018, ahead of transferring Off-Broadway

"A masterpiece ... mesermising to watch. Nothing less than a theatrical triumph" ~ Scotsman

"Bold, beautiful and utterly absorbing theatre, finding the thrilling drama inherent in the human story. It takes your breath away" ~ The Stage