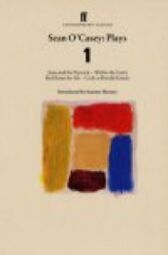 The first volume of Sean O'Casey's plays includes Juno and the Paycock, Within the Gates, Red Roses for Me and Cock-a-Doodle Dandy, and is introduced by Seamus Heaney

"From the perspective of the 1990s O'Casey stands out as Ireland's greatest playwright of the century. He it was who most passionately, most powerfully and most memorably dramatized the traumatic birth of the nation

He it was who gave to the twentieth-century theatre a greater range of vivid and original characters, male and female, than any other Irish playwright. O'Casey's language, controversial though it may be in some critical circles, is a third feature of his work which for its richness, colour and vitality has won for him a lasting place in the international repertory" ~ Christopher Murray - from 'Mirror up to a Nation', Twentieth-Century Irish Drama