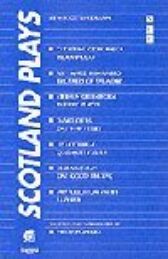 This new volume of Scottish Plays covers a vast range of subject matter, from Chernobyl to Catholicism, from Motherwell to Berlin, and a wide variety of writers from first-timers to established names such as Liz Lochhead and Iain Crichton Smith

The seven plays are -

Catherine Czerkawska's Wormwood, depicting a family caught up in the Chernobyl disaster

Ann Marie Di Mambro's Brothers of Thunder, in which a young man who's HIV-positive takes refuge with a Roman Catholic priest

Stephen Greenhorn's 'road movie for the stage', Passing Places, in which two Motherwell lads steal a surfboard and head for the highlands

David Greig's One Way Street, where Flannery tells us his life story in the form of a guide to Berlin

Linda McLean's One Good Beating, a blackly comic account of a brother and sister taking revenge on their violent father

Iain Crichton Smith's Lazybed, in which Murdo, refusing to get out of bed, is visited by brother, neighbours, doctor, Death and Immanuel Kant

Selected and introduced by Philip Howard, artistic director of the Traverse Theatre, Edinburgh