School of the Americas 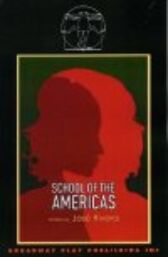 "Mr Rivera's intimate play is something of a bookend to his screenplay for The Motorcycle Diaries, a coming-of-age movie about a young pre-political Che Guevara

In School of the Americas politics serve only as a backdrop to a story about Che's encounter with a young teacher named Julia Cortes. Julia teaches at the schoolhouse where Che is being held, and after pleading with the Lieutenant to be let" ~ Jason Zinoman, The New York Times

"The story comes from historical fact - w When a feckless attempt to start an insurrection in Bolivia led to his capture, Che Guevara was held for two days in tiny La Higuera while authorities decided his fate, and really did talk to a young villager named Julia Cortes

As imagined by Rivera, his conversations with Julia Cortes are sometimes predictable - America is "the greatest enemy of mankind"

But they also contain surprising introspection - Che calls himself "a goddamn joke" and "a small, failed, stupid man"