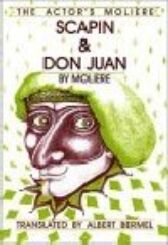 In one of Moliere's most popular plays, Scapin, that monarch of con men, puts his store of ingenuity to work, getting two lovesick young men married to the girls they pine for and, along the way, taking revenge on their grasping old fathers

Closed down after its first, highly successful run because of opposition from powerful enemies of the playwright, Don Juan was performed in a bowdlerized version for almost two hundred years, until actors, directors and critics restored the original text, recognizing it as the most ambitious and mightiest of Moliere's prose plays