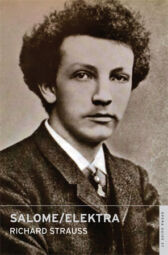 Richard Strauss, already known for his wonderful orchestral tone-poems,turned his genius at the start of the twentieth century to opera, and this Guide contains the texts and introductions to his first two masterpieces in what was, for him, a new genre

Despite obvious similarities - both operas consist of one Act, centred upon one female title role - the articles included here reveal that the operas are really quite different in subject and treatment

Salome, based on Oscar Wilde's notorious play, has a kaleidoscopic range of orchestral colour and a lurid climax in The Dance of the Seven Veils - an episode which has challenged generations of sopranos to dance as well as sing

Elektra was derived from the tragedies of the Ancient Greeks by the Austrian poet Hugo von Hofmannsthal, and is the first of his many collaborations with Strauss

It is also a study in neurosis, ripe for Jungian comparative analysis