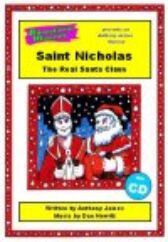 Large Mixed Cast
This is a re-telling of the legend that gave us Santa Claus ...

Two schoolgirls are transported to a snowy Christmas Eve 1,700 years ago. There they meet a young priest who tries to stop three young girls being sold into a life of slavery

To this end, he throws three bags of gold into their father's house. The gold will mean that the girls can marry the boys they love and avoid the evil slaver Demus

But will the money save the girls? And will their experience help them and their sceptical brother believe in all the Santa Clauses?

Welcome to the City

Have You Seen? - The Children
Not A Penny To My Name - Sirus
Must Not Love - The three daughters
Slaving Away - The Slavers
Sharing Is Better - Saint Nicholas
Presents Down The Chimney - Sirus and his daughters
Thank You - Saint Nic, Vicki & Sarah
One Man - The Sailor & All
Has Anyone Seen Santa? - David, Father Christmas, Kris Kringle , etc
Merry Christmas Everyone - All