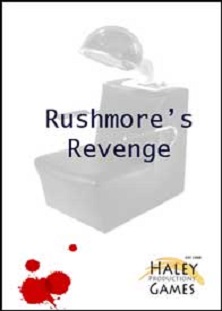 Set in Rushmore Beauty Academy for Women, Staffordshire, England, this takes place during a social for graduating class of 1979 (or any other year of your choosing)

But now men will are to be admitted to the school

Bernice Rushmore, whose family founded the school, is resigning from the Board Of Regents and withdrawing her funding

Naturally, it's all very upsetting

MAUDE GREENFIELD: The Chancellor of Rushmore Beauty Academy for Women. She recently decided to admit men for the first time in Rushmore's 80-year history. This has made some people very upset

JANE DODGET: Rushmore's Dean of Students for the past seven years. A refined "lady" who abhors the thought of men attending Rushmore because females are, as everyone knows, intimidated and distracted by the opposite sex

OLIVIA DODGET: Jane's rather dimwitted daughter. Olivia isn't attending Rushmore by her choice but by her mother's. She dreams of moving to America and becoming roller derby queen

BERNICE RUSHMORE: Chairwoman of the board of Regents. Her family founded Rushmore in 1899, but she's decided to resign from the board (and take her money with her), leaving Maude Greenfield no choice but to admit men

KAT OVERTON: The top student of this year's graduating class. Kat is trouble with a capital T, just ask Bernice

Men who want to enter the academy

Feminists who want to close the school because it's degrading to women. Protesters against males attending Rushmore