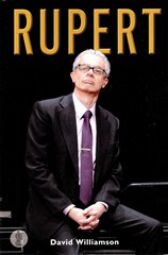 In his latest play, Rupert, Australia's best known and multi-award winning playwright David Williamson tackles the rise and rise of ex-Australian citizen and one of the planet's most powerful, influential and feared men, Rupert Murdoch

Spanning most of Murdoch's lifetime-from his early student days at Oxford to the most recent phone hacking scandal that rocked News Corp.-Williamson asks who the real Rupert Murdoch is and tries to uncover what makes this complex and fascinating character tick