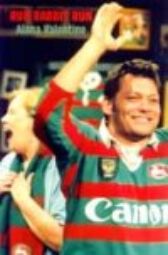 When the National Rugby League thought they could jettison the Rabbitohs to streamline their competition they were in for a shock. South Sydney, a proud club that had won more premierships than any other, wouldn't lie down

Alana Valentine's play is a verbatim piece about the battle to overturn the decision. Based on extensive interviews with both public faces of the campaign including George Piggins, Andrew Denton and Nicholas Pappas, and grassroots supporters such as Mark Courtney, Barbara Selby and Marcia Seebacher, this is a story of passion and politics that goes beyond football

For when South Sydney came out fighting they showed the importance of community and the power of momentum. Their battle through the courts, and in the streets of Sydney, captured the imagination of the wider population as they successfully fought to regain the right to play league football at the top level

'In the case of people versus the juggernaut, the people won' ~ Andrew Denton