Room on Floor One 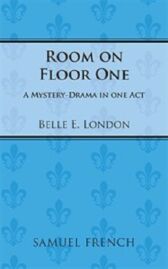 Why did John, her unemployed, free spending husband, bring Mimi to a broken down hotel?

John is summoned to a mysterious appointment and while he's gone, Mimi's visited by a woman who warns her that her life is in danger

Mimi refuses to believe it

When John returns, he pleads for money

They become locked in a life and death struggle

In the end, Mimi triumphs