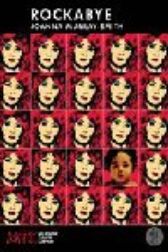 Sidney can feel her career slipping down the plughole

No one loves a pop star when she's forty not if she isn't Madonna or Kylie - so unless she wants to join the ranks of the has-beens on the casino circuit, she better get herself a hit

But what if she regains the whole world and still feels that something's missing?

Returning to the feisty mood of her hit The Female of the Species, Joanna Murray-Smith in Rockabye gives our self-involved, celebrity-obsessed culture a satirical duff-up