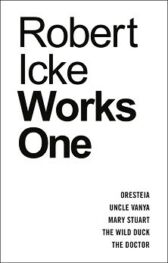 Robert Icke's thrilling and radical adaptations of some of the great texts of Western theatre have enthralled theatregoers in London, in New York and around the world

This first collection of his multi-award winning work includes ....

Oresteia: Orestes' parents are at war. A family drama spanning several decades, a huge, moving, bloody saga, Aeschylus' greatest and final play asks whether justice can ever be done - and continues to resonate more than two millennia after it was written.

Mary Stuart: Schiller's political tragedy takes us behind the scenes of British history's famous rivalry between Elizabeth I and Mary Queen of Scots.

The Wild Duck: A new version of Ibsen's masterpiece about the nature of truth, in which a stranger intervenes to reveal the lies in the past of a family, with tragic consequences.