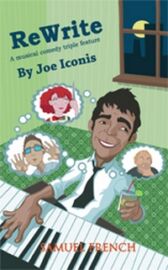 ReWrite is a musical comedy triple feature comprised of three wild musicals that connect in surprising and dangerous ways ...

Nelson Rocks! is a pop/rock show about a young dude who needs to fix his life before the 'You better get to class' bell rings

Populated by adolescents, the show throbs and pulses along a locker-filled hallway, barreling towards its inevitable showdown

In this heightened look at the suburban experience, a little bit of blood is spilt, but nothing that a few kitchen towels can't clean up!

The Process deals with a writer - a writer with a deadline ...

As the Dunkin Donuts fills with the voices in his head, the writer must conquer his writer's block and finish his musical

The show is performed with a cast of six - three men and three women, all of whom triple specific parts

"A time-warping Long Island comedy-with improbably catchy songs like a middle-aged woman's hilarious ode to marzipan (the only thing she can cook) and a short libretto full of bull's-eye jokes ... ReWrite is unstoppable" ~ Variety

"ReWrite is a bitchin' triptych of one-act pop/rock musicals. Iconis has a reservoir of emotions from which to draw and an iconoclastic voice with which to channel them-what these misbegotten misfits discover about themselves is equally macabre and wonderful" ~ New York Press