Reports From the Holocaust - The Making of an Aids Activist 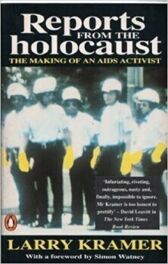 For almost ten years, Larry Kramer has been the rousing voice of American homosexuality, calling his comrades to battle against the establishment, both medical and political

It was Kramer who first made America aware of the scope of the AIDS epidemic and through his writings, speeches and plays, including The Normal Heart he, more than anyone, has galvanised American gays into fighting the apathy, neglect and scorn of the authorities