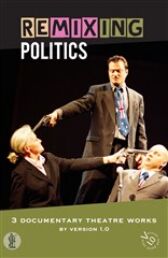 The Wages of Spin cleverly examines the issues surrounding the 'intelligence' reports that were used as the pretext for Australia's involvement in the Iraq war. Subversive, witty and playful, The Wages of Spin juxtaposes the media's obsession with stardom with the shocking realities of war

Deeply Offensive and Utterly Untrue distils 8,800 pages of the Cole Inquiry into the 'wheat-for-weapons' scandal into provocative and entertaining theatre. Australian government ministers and Australian Wheat Board executives all seemed to suffer from collective amnesia about AWB paying Saddam Hussein's regime $250 million in bribes even as Australia was preparing for war against Iraq