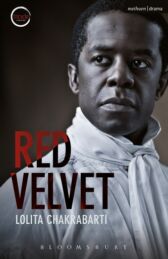 Written by the Evening Standard's 2012 Most Promising Playwright, Red Velvet uses imagined experiences based on the often-forgotten but true story of Ira Aldridge, an African-American actor who, in the nineteenth century, built an enormous reputation on the stages of London and Europe

The play is set in the Theatre Royal, Covent Garden, in 1833

Edmund Kean, the greatest actor of his generation, has collapsed on stage whilst playing Othello

Ira Aldridge, a young black American actor, has been asked to take over the role

But as the public riot in the streets, how will the cast, critics and audience react to this revolution taking place in the theatre?

... a cracker of a play - gripping, intelligent and passionate ... this is a fine, subtle play that not only depicts the ugliness of prejudice in action, but also touches on wider questions about how change is achieved in theatre and society" ~ Sarah Hemming, Financial Times

... the play's achievement is to animate the themes of racism without descending into preachiness or I-told-you-so sermonising ... it's hilarious to watch. But the play resists the temptation to mock the Victorians without mercy. It's all done with warmth and a sense of proportion" ~ Lloyd Evans, Spectator