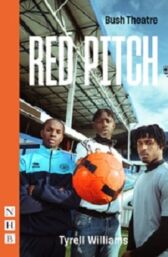 Living out dreams of football stardom

Beyond their football pitch, local shops are closing, old flats are being demolished as new flats shoot up, some residents struggle to stay while others rush to leave

When your local football pitch has been a home from home, a place where you've laughed, fought and forged friendships, what happens when it's under threat?

A coming-of-age story about what it means to belong somewhere, Tyrell Williams' fast-paced and sharp-edged play tells a powerful story about gentrification, regeneration and the impact of this relentless change on London's communities

An earlier version of the play was presented in June 2019, as part of the Untold Season at Ovalhouse, London

'90 minutes of end-to-end stuff... the plot is pacy and exciting. The language is rich and vivid. It's also very funny... It's still rare to see a play about young, black, working-class youths on our stages - rarer still to see one in which they are celebrated like this' ~ Evening Standard