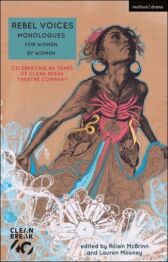 Over 40 years, Clean Break has commissioned some of the most progressive and brilliant women writers to write ground-breaking plays, alongside developing the writing skills of the women they work with in its London studios and in prisons

This is a collection of monologues from this canon

Offering female performers a diverse set of monologues reflecting a range of characters in age, ethnicity and lived experience, the material is drawn from a mix of published and unpublished works

"I fumed and laughed and cried. A rich, varied and timely anthology of monologues for Everywoman. Clean Break is giving actors of ALL ages, ethnicities and backgrounds an opportunity to shine" ~ Indira Varma, Actor

"Clean Break has an archive of incredible monologues for women; women whose voices aren't often heard and whose experience is rarely given this level of complexity and humanity . . . A special resource that I wish had been around when I was at drama school" ~ Zawe Ashton, Actor and Clean Break Patron

"Rebel Voices is a compelling anthology and a unique insight into a brilliant, ground-breaking theatre company" ~ Kathy Burke, Theatre Director