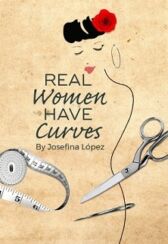 Set in a tiny sewing factory in East L.A, this is the outrageously funny story of five full-figured Mexican-American women who are racing to meet nearly impossible production deadlines in order to keep their tiny factory from going under

And while they work, hiding from the INS (Immigration and Naturalization Service), they talk... about their husbands and lovers, their children, their dreams for the future

The story is told from the point of view of Ana, the youngest among them

Just graduated from high school, Ana dreams of getting out of the barrio and going off to college and becoming a famous writer

Although she needs the money, Ana doesn't like working at the factory and has little respect for the co-workers, who make fun of her ambitions and what they consider her idealistic feminist philosophies

However, Ana keeps coming to her job and chronicling her experiences in a journal

As the summer unfolds, she slowly gains an understanding and appreciation of the work and the women, eventually writing an essay that wins her a journalism fellowship which will take her to New York City

This play, a microcosm of the Latina immigrant experience, celebrates real women's bodies, the power of women, and the incredible bond that happens when women work together

"A big success. Three nights, nearly 1,000 people in attendance. [A local newspaper review stated that] 'The dialogue, sprinkled with Spanish phrases, is funny even when it is painful'" ~ Review by Salome Martinez Lutz, Teatro Nuevo Mexico, Albuquerque, N.M.