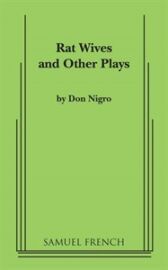 In this unusual monologue, the great enigmatic painter Vermeer becomes completely and perhaps fatally obsessed with the mysterious perspective box he's bought from van Hoogstraten - it's a little box you look in to see a perfectly crafted little world, in which there seems to be something moving

It's 1950, and David Armitage, an old poet, sitting in the tangled and overgrown garden, has been left alone in the huge old wreckage of the Pendragon house by the death of his housekeeper and long time friend Sarah

His half-sisters Lizzy and Molly keep fussing at him, but the unexpected connection he makes is with his troubled and lost niece Becky, who's considering abandoning her children and running away. Part of the long series of Pendragon County plays

They are having some serious personal problems - they're drinking before the show, there is treachery afoot, and everybody raise their hands who's slept with George Bernard Shaw

In this powerful longer monologue, Merlin Rhys, a man in his sixties, recalls the mysterious girl he can't get out of his head - a mad girl with one green eye and one brown. Complex, absorbing, funny, horrifying - a great showcase for a mature actor in his prime

In this chilling mystery, Moira is taking a walk in the park at the intermission of a Shakespeare play and is suddenly filled with the absolute certainty that there is a dead girl in the woods

Is the strange man she met at the play the killer?

Or is something darker and more ambiguous going on?

A quiet white knuckle experience that creeps up on you like a murderer ...