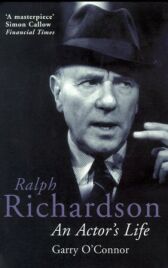 Garry O'Connor's groundbreaking biography of Ralph Richardson captures the essence of the man who dominated Twentieth-century British theatre, and the magic of his unforgettable performances

A bestseller in both the United States and UK, The Economist described it as, 'Subtly developed as one of Sir Ralph's own great performances'

A lovable and unpredictable character, Ralph Richardson should be preserved in the gallery of great eccentrics alongside such figures as Doctor Johnson, Winston Churchill, and W.C. Fields

Through stamina, talent and luck he transcended the vicissitudes of an inconstant profession to forge a career of world rank - alongside such close friends and colleagues as Laurence Olivier and John Gielgud

Drawing on archives of the Old Vic and on many conversations with Sir Ralph and those around him, O'Connor chronicles the events of his long, illustrious and varied career

This edition includes O'Connor's fascinating Diary of a Biographer, telling the story of his own relationship with Sir Ralph during the research and writing of this book

"Stunning, the best biography of an actor I've ever read" ~ The New York Times

"Exceptional ... a sensitive, searching and exact account of a supremely elusive man" ~ Times