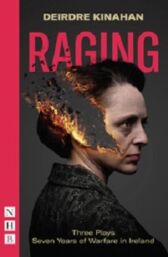 A trilogy of landmark plays, Wild Sky, Embargo and Outrage, commemorating seven years of warfare in Ireland, from the 1916 Easter Rising to the Civil War which began in 1922

Wild Sky is a story of interlocking lives - of the politicised Josie Dunne, and of Tom Farrell, who is driven only by his love for her

As the Rising plays out, there are unforeseen consequences for everyone involved...

Embargo focuses on a pivotal moment during the Irish War of Independence in 1920, when dockers and railmen refused to transport armed troops or handle any weapons arriving from Britain

Like everyone else in Ireland, they become deeply conflicted as the country spins toward a devastating Civil War

Each of the three plays was first performed a century after the event which it depicts, and they were commissioned and performed by companies including Fishamble, The New Play Company, Meath County Council Arts Office, Dublin Port Company and Iarnród Éireann

Together, they challenge the historical narrative, mixing true-life testimonies with powerful drama to create a theatrical hurricane of empathy, action and truth

A soaringly touching piece, taking the tiny canvas of a love story between a boy and girl and giving it the compass of inevitable, pre-destined loneliness and loss... searing, beauteous simplicity ~ Independent.ie on Wild Sky