Radiance - The Passion of Marie Curie 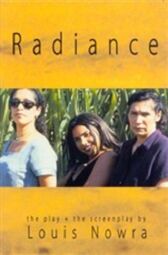 With backbreaking work in a ramshackle lab in Paris, Marie Curie and her husband Pierre achieve a revolutionary understanding of radiation and share a Nobel Prize

When her beloved Pierre dies in an accident, Marie is plunged into depression

Paul Langevin, fleeing an unhappy marriage, gives her the strength to return to her work

"Juicy, gaslit melodrama ... illuminates the challenges that Marie Curie faced in pursuing a career in the sciences at a time when it was virtually unheard of for women to take prominent roles in academic or public life" ~ The New York Times

The actors in the company are seated on a bare stage, taking in the action of the play. When their turn comes to play a scene, they rise, meet downstage and play it

Images suggesting various locations are projected on the upstage wall

The only furniture is a set of straight-backed chairs and occasionally a bed and a small table, all brought into play by the actors