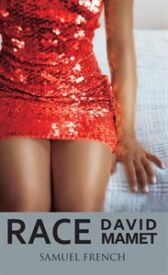 David Mamet turns his spotlight on America's most controversial topic ...

A new legal assistant gets involved in the case, and opinions that boiled beneath now explode to the surface as dangerous truths are revealed and no punches are spared

"Mamet is most concerned with the power and treachery of language - a line of dialogue vital to the prosecution case is cynically rewritten by the defense. Mamet's larger contention is that attempts to create a more equal and tolerant society have made race an unsayable word ... brilliantly contrives here a moment in which the single most taboo sexual expletive is ignored by an audience which then gasps at the word "black" ... Mamet remains American theatre's most urgent five-letter word " ~ The Guardian