Putting It On - The West End Theatre of Michael Codron 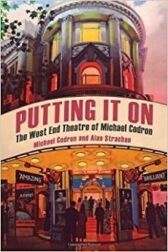 Still active after an astonishing half-century in the industry, every major British dramatist of the period has had a production under the Codron banner - Alan Ayckbourn, Alan Bennett, Michael Frayn, Simon Gray, David Hare, Joe Orton, John Mortimer, Harold Pinter and Patrick Marber, to name just a few

Describing himself as 'A man of vulgar taste with an impeccable streak', he has had many hits with lighter entertainment as well as serious plays

Aware of his own homosexuality from an early age, Codron grew up in an era of prejudice and intolerance

In Putting It On he talks frankly of the most important relationships of his life, from early flings with older, sophisticated figures like David Hicks to David Sutton, the main love of his life and his business partner for over twenty-five years

A fascinating insight into the victorious ups and hair-raising downs of the theatre, Putting it On is a testament to an extraordinary career, dramatic in every sense of the word, and unlikely to be parallelled in our time