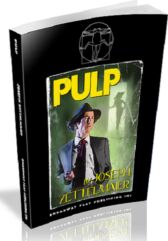 Private Eye Frank Ellery doesn't know it, but he's taken on the strangest case of his life in this highly accomplished murder-noir ...

A literary agent has been gruesomely murdered

In the end, it's as if he's wrapped up two plays into a single script

And the amazing thing is that both are pretty entertaining

The first act is an adoring and witty homage to film noir. There's a hard-drinking, down-and-out private eye, Frank, and the slinky dame who hires him to solve a murder

Turns out, she's one of four authors of pulp novels suspected of killing the agent who represented all of them

There are plot twists

And twists on twists

And loads of witty dialogue, too, as Zettelmaier walks an ever-so-fine line between homage and spoof

Zettelmaier is a wonderfully facile storyteller, but he doesn't always play by the rules ...

In Act Two Frank's investigation moves forward, but along the way, Zettelmaier finds a way to immerse us in each of the four writers' genres of pulp

It's a clever device

And it works, giving us more information about each of them than if he followed a more traditional exposition

Walter Kingston-Smith is a writer of so-called 'hero pulp'