Projections Four and A Half - Film-makers on Film-making 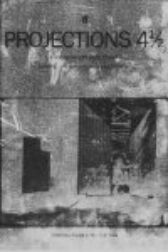 When the door of the Lumière factory opened to release the workers, it was more than just the end of the day - it was the beginning of a brand new art form that has shaped the consciousness of the twentieth century. This very first moment of the very first film gave birth to other moments that are cherished in the recollections of people all over the world. In this issue we collaborated with the French film magazine Positif

The centrepiece of this issue came to us from Positif. For their 400th issue Positif asked the film-makers with whom they had forged a special relationship over the past forty years to write about the films, directors and actors who have had a special significance for them

An array of seventy international film-makers - including Altman and Angelopoulos, Chabrol and the Coens, Eastwood and Frears, Kazan and Kieslowski, Leigh and Loach, Makavejev and Marker, Ophuls and Penn, Resnais and Rohmer, Rosi and Rudolph, Tavernier and the Tavianis, Varda and Zulawski, among others - responded, and we present this treasure trove of film-making comment as a way of celebrating the 100 years of cinema

1995 was also the centenary of Buster Keaton. In honour of this, Kevin Brownlow - noted film-maker, historian and restorer of the silent cinema - recounts the making of Keaton's masterpiece, The General