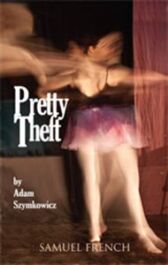 A play about ballerinas, boxes and the dangers of beauty ...

After losing her father, Allegra falls under the wing of bad girl Suzy, only to find an unexpected friendship with Joe, an autistic savant

When things take a violent turn, Allegra and Suzy escape cross country and befriend Marco, a mysterious thief who claims he cannot be caught

"Disturbing but touching ... Mr Szymkowicz writes quirky plays about contemporary topics like online dating and gender roles, but there always seems to be something - a knife, a rope, a dead body - in an unexpected place. In Pretty Theft, the undercurrent of danger goes beyond quirkiness; it's more subtle and ultimately more horrifying. The play takes place in a terrifying world where reckless people get hurt, and so do more or less innocent bystanders" ~ The New York Times

"Adam Szymkowicz has written a play full of interesting people ... The dialogue and humor in this play are excellent ... It runs a lean, intermission-less 90 minutes and is very satisfying ... This would be good theater for young women not only to see but also to perform" ~ NYTheatre.com