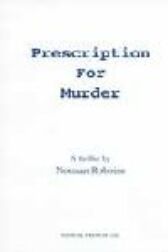 In the seemingly quiet town of Bere Knighton there is never a dull moment for Dr Richard Forth ...

Not only does he have a hectic work schedule and an awkward yet close friendship with his ex-girlfriend, Julia, but his wife, Barbara, is constantly ill and nobody knows what is wrong with her

When Eric Dawson, a stranger, claims to have known Richard's second fiancée - a woman Richard claims does not exist - Barbara's health worsens still

With bad luck spreading almost as quickly as bad news, it becomes apparent somebody is out to kill Barbara, and anyone else who gets in their way

This thriller by Norman Robbins is sure to keep you guessing until the inevitable, yet unpredicatable, final twist at the end