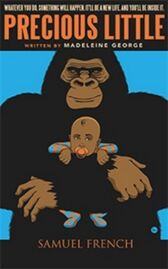 Brodie, a gifted linguist, learns unsettling news about the baby she carries

Unable to get comfort from her girlfriend, she finds it in the two least likely sources imaginable ...

- the elderly speaker of a vanishing language

- and a gorilla at the zoo!

NB - The Ape does not wear an ape suit. The Zoogoers are a single character - the multi-voiced character of a crowd, rather than one actor playing many roles

Runs about 90 mins (no interval)

"Just sit in your chair and let George's ideas and words flood over you and raise you up. Her use of language is at the same time incredibly economic and hugely expansive" ~ Pittsburgh City Paper